The Power of the Cave 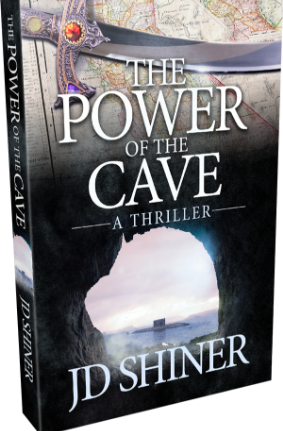 The saga continues as our lead characters, Napoleon Hancock and Cassandra Caro go to new depths to find the Sword of Abraham in this riveting sequel by Readers Favorite Books award winner J.D. Shiner.

A buzzer sounded from the kitchen in the next room. Cassandra stood and moved down the hallway into the eating area.

She turned off the buzzer, opened the oven, and removed a large, fragrant pan of breakfast quiche. The cheese on top bubbling to perfection. She set the quiche, along with a bowl of fruit on the snack bar. She set out plates, cups, and tableware next to the food and then returned to the living room.

She stood in the hallway by the door and announced, “We’re going to have a long day. Let’s at least have one good meal. Brunch is served. Come help yourselves.”

The three men as one glanced at her.

Cassandra turned and started toward the kitchen. The men rose from their chairs and followed her down the hallway. Napoleon, Sean Carlos, then last in line was Jack Stone. As Stone stepped into the conjoining hallway between the two rooms, the entire westward-facing glass wall of the living room exploded inward. Shrapnel consisting of glass and metal strafed the area in all directions. Pieces of wall debris hit Jack Stone full on the back and parts of his upper thighs. The gouging impacts caused multiple free-flowing wounds. A large portion of soft tissue above his right hip and lower back was blown away, leaving a gaping hole in his torso. The force of the explosion blew him into Sean Carlos directly in front of him, who took a random 4-inch-long piece of metal into the upper back just right of his left shoulder socket.The entire southwest side of the beautiful beach home collapsed slowly into the warm sand of Playa del Rey beach.

Napoleon lay stunned by the explosion but still conscious. Chalky drywall, splintered wood, and a fog of dust and sand filled the space around him. He found himself laying on his stomach. He struggled to his hands and knees. Directly in front of him, he saw a petite foot with painted toenails extending from under a sheet of fallen drywall. He reached out with his right hand and gently embraced it. He gave it a slight tug.

The foot moved slightly, then pulled away from his grasp and disappeared under the rubble as Cassandra rolled over and burst through the debris to face him on her knees. She had her Glock 27 chambered for .40 SW in her right hand. Tears ran in rivulets down her white dust layered face.

She moved to the side of Napoleon to view the fallen Sean Carlos. He lay unconscious, face down, in the middle of the hallway with a piece of metal sticking out of his upper back. He was bleeding profusely from around the edges of the wound. She moved to him on her hands and knees.

Napoleon joined her. He held up his fist for silence. They could hear voices from outside the ruined house. They listened. The sounds were snippets of conversation in a Middle Eastern dialect.

Cassandra checked Sean’s pulse, then the wound and whispered, “He’s alive…but is going to need medical help soon.” Napoleon nodded, turned, and crawled down the debris-filled hallway behind the fallen Sean Carlos.

There he found a bloodied arm wearing French cufflinks and a stainless-steel Omega Sea Master watch extended from the rubble.

Napoleon pushed through the field of debris to get closer to his friend and mentor. He grasped Stone’s arm and searched for signs of life. There was a fading pulse at the wrist. Napoleon followed the arm by touch under the pile until he was able to get two fingers on Stone’s lower neck. Here he felt a stronger pulse. He pulled his hand back. It was wet with blood from his fallen friend.

Napoleon couldn’t speak. He felt numb. His throat constricted. His heart ached in a way he never thought possible. He felt high swells of anguish for a fallen friend, a surrogate father and an exemplar of integrity in his often very conflicted world. He nodded his head as Cassandra put both arms around him.

Bateman stood and said softly, “He’s still alive. There is hope. I’ll be waiting out in the hall. When you’re ready to talk, I’ll be there. I have instructions for you from POTUS regarding the mission.” He then stood along with the two security men and exited the room.

Cassandra held Napoleon unabashedly in her arms. She didn’t say a word. She didn’t have to. They sat that way for well over ten minutes.

Napoleon sat up and held her hand. He drew it slowly to his lips and gently kissed her exposed fingers.

“Cassie,” he whispered, “I thought it was over. I thought we concluded the mission yesterday with the death of Suleiman bin Jarvis. I was so very wrong. I should have anticipated they wouldn’t let the sword get away from them without a fight once they knew of its existence. My lack of judgment may have cost Jack his life.”

“No, you didn’t! Stop that self-deprecation right now!” Cassie scolded him as no one else on the planet could. “Listen to me… Jack and Sean Carlos came to you on Sean’s hovercraft. They inadvertently led the terrorists right to your doorstep. You didn’t ask them to come. They came on their own once Stone found out Fu Chang was still in the cave complex and was asking for you. True, the mission was not over, but you didn’t know that. Stone didn’t know that until Fu Chang was discovered hiding behind the north panel.”

Napoleon stared up at the ceiling, looking at nothing. “I have a nagging feeling I could have done something to prevent what happened to Jack. I was overconfident.”

“Jack was your mentor, the older brother you never had, the leader, the teacher, the friend you will revere every day of your very long life. But you know what, he would want you to go on, to push forward, and to find the enemies of our country that have caused this great havoc. He would want you to see justice served on them, either by your hand or by forced incarceration in a bad place for a very long time. He would want you to finish it, Napoleon.”

He turned to her, squeezed her hand gently, and said, “He would, wouldn’t he?”

“He would,” she replied. “And you know what else?”

“I want to examine what is in all those cave passages,” she replied. “We were only in the East tunnel. Let’s get back up there and find out what Fu Chang wants from us, and what we can find out from him to help us retrieve the Sword of Abraham.”

“That would be the first order of business,” Napoleon concurred. “Maybe then, along with Dr. Tilford, we’ll be able to explore all the mysteries in the other passages of the whole cave complex.”

“Makes sense to me.”

“You are an amazing lady,” Napoleon said with a smile. “Let’s see what Bateman has for us.”

They stood and with renewed resolve walked through the two exit doors and out to find POTUS’s chief of staff.

Buy The Caves of Corihor

Buy The Power of the Cave