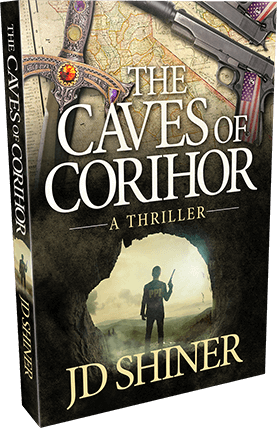 A compulsive, page turning debut novel by a guy that knows his subject matter. It’s action packed, and loaded with fascinating characters that are fun to follow.

Three eyewitnesses saw the attack and each gave a different version of what happened. They were present in the Grand Ballroom of the Mark Hopkins Hotel in San Francisco at a reception sponsored by the Saudi trade delegation.

A five-member string ensemble played Mozart in the background. Over three hundred Arab and non-Arab people in the elegant ballroom were eating, drinking, and enjoying their evening together.

The chairman of the Saudi trade delegation stood approximately ten feet from the side of a raised podium where he would soon speak to the assembled guests. Sound technicians were making last-minute adjustments to the microphones and audio equipment on the podium. Two of his armed security detail stood forty-five degrees to the side of and slightly behind him. They carefully scrutinized the mixed crowd in the immediate vicinity of the chairman. The eyewitness with the most detailed description of what happened was a hotel waiter serving guests at tables in the VIP section of the room. The VIP section was in close proximity to the speaking platform. He was carrying a tray with a glass of soda water for the chairman.

The waiter reported that he noticed a nondescript man of medium height, wearing tinted eyeglasses and formal Arab robes, including a keffiyeh, calmly approach the speaking platform. The eye- witness estimated he was standing fifteen feet away from the chairman as he observed the following details.

One of the chairman’s security guards immediately stepped forward to put himself between the nondescript man and the chairman. The interloper quickly changed direction, turned ninety degrees away from the security guard, and walked to the stairs leading to the speaking platform. He took two steps up to the podium level.

According to the eyewitness, at that point the intruder turned around, facing the chairman with something in his gloved right hand. He pointed it in the chairman’s direction. The eyewitness heard three rapid, muffled pops. The chairman and his two security men dropped to the polished wood floor. The nondescript man stepped down off the platform and walked into the crowded room.

The waiter dropped the tray of beverages he was carrying into the lap of a terrified matron and bolted for the exit. Screams and wails of distress filled the ballroom. Pushing, panicked shoving, and general pandemonium broke out like ripples in a pool of water as the attendees near the raised platform realized something bad had happened and quickly moved away from the three bodies lying on the floor.

Hotel security cameras later showed a nondescript man in Arab dress exit the ballroom and stroll into a corridor leading to the hotel kitchen complex. A lone security camera mounted above the rear exit door of the kitchen showed that same nondescript man step outside into the alley from the exit door, turn around, and shoot out the camera. Frame stills taken from that same camera feed moments before it was destroyed were inconclusive in identifying the shooter. Authorities found a keffiyeh and traditional Arab robes stuffed into a garbage Dumpster outside the rear exit door of the hotel’s kitchen.

They also found a semiautomatic Walther model PPK chambered in .22 caliber in a second Dumpster located one block south of the Mark Hopkins on Pine Street. The Walther was fitted with a custom-made, two-inch, sound-suppression device. The ammo clip was missing. The serial numbers had been filed off the weapon and suppressor. No fingerprints or DNA remnants were recovered from either the firearm or any of the recovered garments.

The City of San Francisco Coroner’s Office determined that death for the chairman and his two security guards had occurred almost instantaneously. The report stated that a .22-caliber, hollow-point bullet travelling at subsonic speed had entered the left eyeball cavity of each of the deceased. Upon ingress to the soft part of the brain, the expanding bullet fragmented, causing catastrophic damage to the contents of each man’s interior cranium.

Each of the three men was functionally dead before they hit the floor.

A Description of the Sword of Abraham

“Stone walked around his desk and studied the image of the magnificent sword on the large HD display. It was the first time he’d been able to study the images sent by Napoleon’s team in detail. The report had not been exaggerated. It was an exquisite work of combat art. Stone moved closer to the display to get a better look at the details of the weapon.

The handle had precious stones inlaid along the entire grip, not to be ostentatious but to be functional. It was easy to see where the thumb and four fingers of the hand would naturally fall in place on the grip between the precious stones when hefting the weapon. The placement of the gems would give the user more purchase in swinging or thrusting with the sword.

The blade itself was incredible in its beauty and intended function. From the tip of the blade to the end of the grip it was perhaps thirty-six inches in total length. It appeared to be four inches high where the blade crested in its peak before gracefully tapering out to the pointed end of the weapon. The construction material was interesting. It seemed to be multi-colored metals layered one upon the other. Stone could see at least six different layers counting up from the bottom of the blade. Each had a slightly different hue. Ambient light on the image reflected multiple colors from those layers of metal. Stone knew just looking at it that the weapon would be exceedingly sharp.

The top three inches of the blade had been honed to a mirror finish. Engravings ran in a single row all along the visible side of the blade. The ancient characters ran together with no apparent punctuation even though he could see several of the individual pictographs. Several of them looked like a bird of some kind. The rest of the engravings were entirely foreign to him.”

Buy The Caves of Corihor

Buy The Power of the Cave